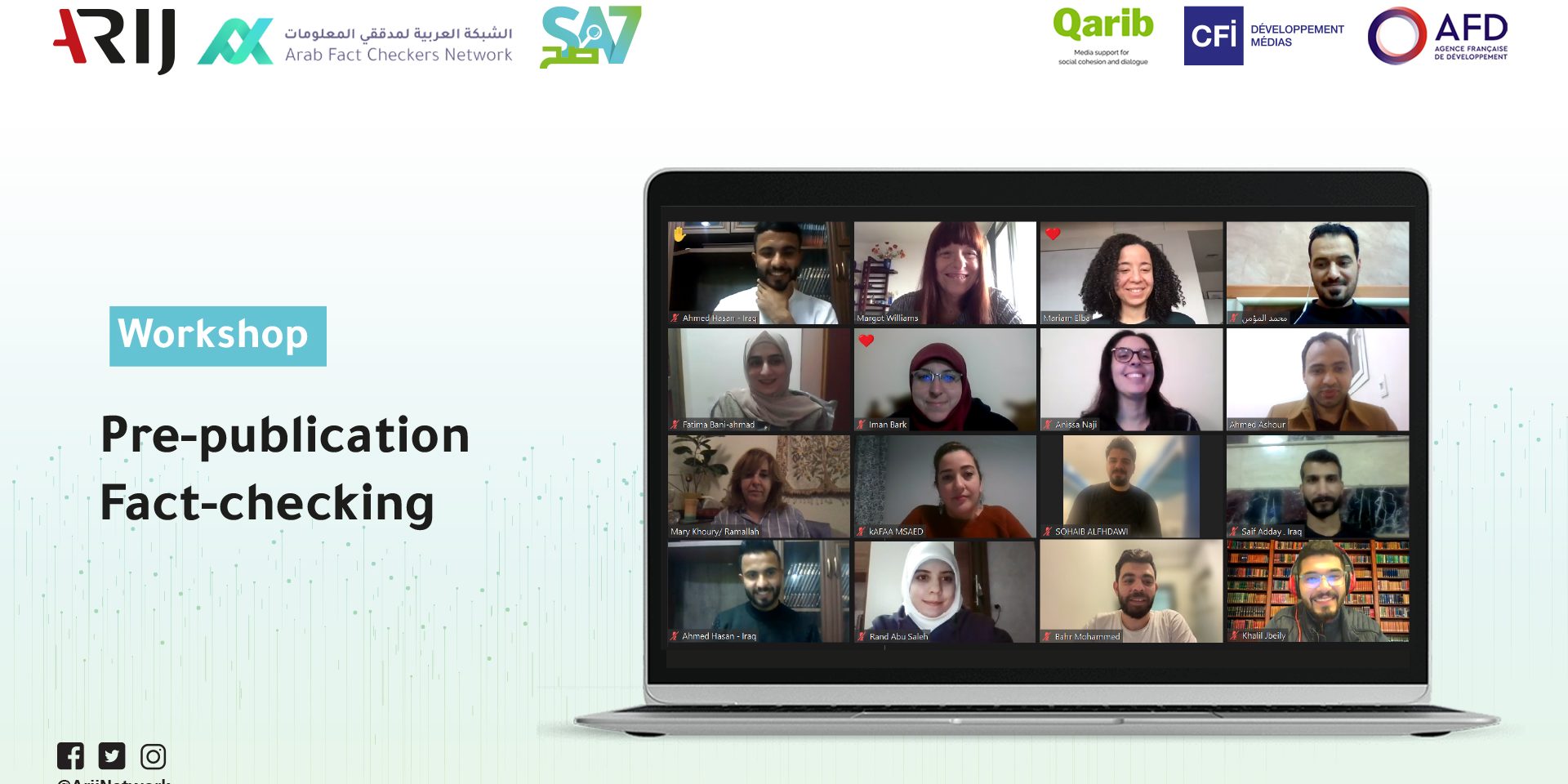 The Arab Fact-Checkers Network (AFCN) led by ARIJ organised a virtual four-day workshop from February 21 to 24, 2022 through ARIJ Academy, on “pre-publication fact-checking”, in the framework of the project “Sa7” which is part of the regional program “Qarib”, implemented by the French Agency for Media Development (CFI) and funded by the French Agency for Development (AFD).

During the first three days of the workshop, Egyptian-American journalist Mariam Elba, who works at Propublica, and Margot Williams, an American investigative research editor at The Intercept, trained 16 (freelance) fact-checkers and journalists coming from either media organisations or fact-checking organisations/initiatives. The two journalists did not only train the participants on the methodology of pre-publication fact-checking, but also introduced them to information archiving, research preparation as well as the important relationship and collaboration between fact-checkers and journalists.

“The importance of the workshop lies in learning the tools and skills from Margot and Mariam to pre-fact-checking,” says Fatima Bani Ahmed, one of the Jordanian fact-checkers who participated in the workshop.

Journalist Mustafa Al-Dahdouh stressed the importance of the #Sa7 project, as it enables media professionals to be one of the basic and important tools for checking the facts and the stages it goes through to reach the final product.

The trainer Margot Williams, expressed her delight at the participation in the workshop and the variety of experiences, and emphasised the importance of editing, organising, and archiving the research plan throughout the entire research period.

It is reported that 6 fact-checkers from fact-checking organisations/initiatives in Jordan, Palestine, Iraq and Lebanon participated in the training workshop, in addition to 3 freelance fact-checkers, 6 journalists from media organisations and one freelance journalist who all exchanged ideas, experiences and knowledge among each other during 4 interactive training days.
It is worth noting that the “Sa7” project aims to promote best practices, methodologies, and tools for fact checking in the Arab region, particularly in four countries facing political, economic, and security challenges and where public trust in the media is diminishing, which are; Lebanon, Jordan, Palestine, and Iraq.