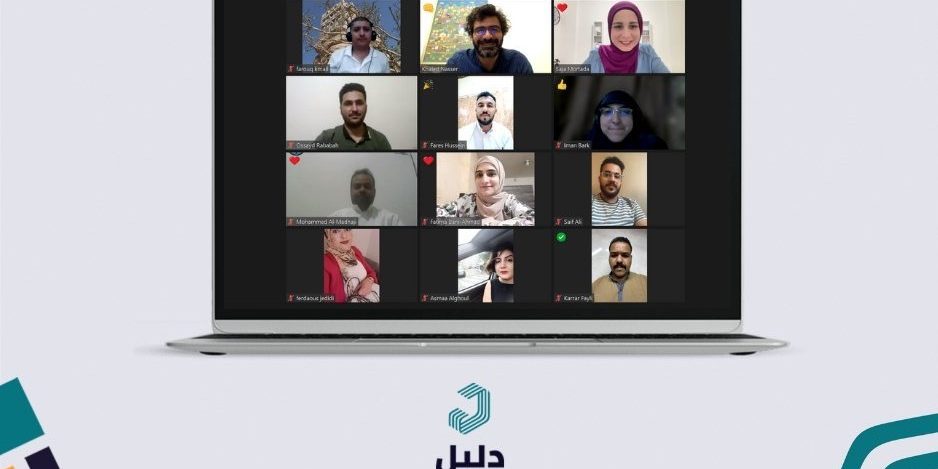 The Arab Fact-Checkers Network (AFCN) led by ARIJ organised a psycho-social safety workshop for fact-checkers under the Dalil project. The workshop was conducted by the Lebanese consultant Dr. Khaled Nasser, a trauma therapist expert, and was held as an introduction for the following individual psychosocial one-on-one clinics offered by AFCN for fact-checkers in the target countries under the Dalil project.

19 fact-checkers from the 7 target countries participated in the interactive workshop, where they received important tips on maintaining their psychosocial safety and dealing with the shocks, threats, and pressures they face in their work.

Dr. Nasser is a family communication consultant specialising in trauma and has been working closely with journalists for the last 7 years. On top of that, he provides remote trauma sessions for journalists covering wars and tensions in the Middle East to support their mental health through ARIJ e-learning course on Edraak Courses platform and the Online Dart Center for Journalism and Trauma.

“Thank you very much. I benefited a lot from this workshop.”, stated Mona Al Saadi, female fact-checker from the fact-checking organisation FactYemen.

Asma Alghoul, a female fact-checker working at the fact-checking organisation Misbar, said that she would like AFCN to hold another workshop like that for the colleagues who could not attend the workshop this time.

The Dalil project is part of AFCN led by ARIJ, with the support of the European Union and in cooperation with SIREN and JOSA. The project aims to increase the usage of locally driven, fact-checked online news in seven countries in the MENA region (Jordan, Lebanon, Iraq, Palestine, Morocco, Tunisia and Yemen).

“Dalil” 1st webinar: Facing the challenges of fact-checkers in the Arab world
June 1, 2022
Go to Top