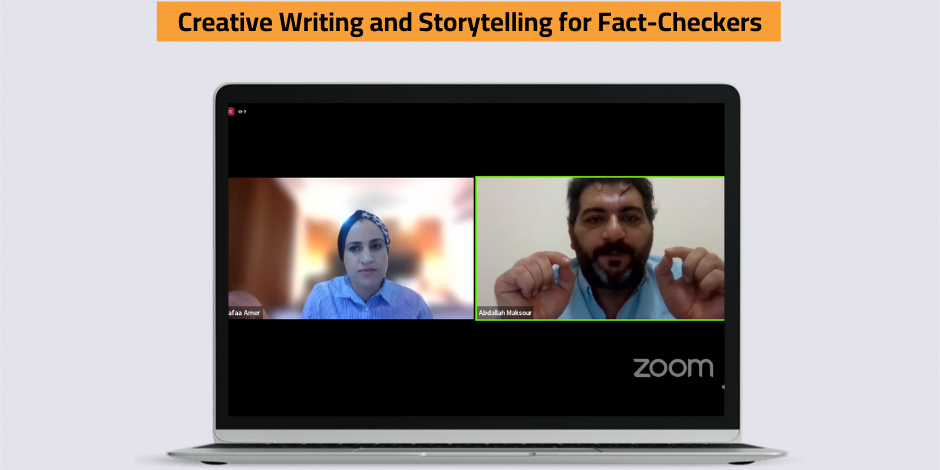 Under the title “Creative Writing and Storytelling for Fact-Checkers”, the Arab Fact-Checkers Network (AFCN) led by ARIJ organised the fourth webinar within Dalil project, which is supported by the European Union, and in cooperation with “SIREN” in Lebanon and “JOSA” in Jordan.

Spanning the two hours, Abdullah Maksour, a journalist and novelist, trained around 200 people who were attending the webinar. Maksour is an international trainer accredited by the International Federation of Journalists and ARIJ Network in journalistic safety and the coverage of crisis areas.

The webinar, which was moderated by Safaa Al Ramahi, a journalist and coach  at ARIJ, focused on guiding fact-checkers to master creative writing and storytelling methods through a set of tips offered by the trainer.

Maksour also presented many examples from real-life situations, demonstrating the benefits of using creative writing in fact-checking reports, and answered all the questions raised by the participants during the session.

“I have learned that writing is based on diverse reading, and the goal of reading is to build a wide vocabulary,” says Iman Auberki, a journalism student from Morocco.

Al-Walid Bentohami, a fact-checker from Tunisia added “Excellent Webinar and I hope to attend more like it. I wish you to offer deeper advanced workshops in creative writing with the distinguished trainer, Abdullah Maksour.”