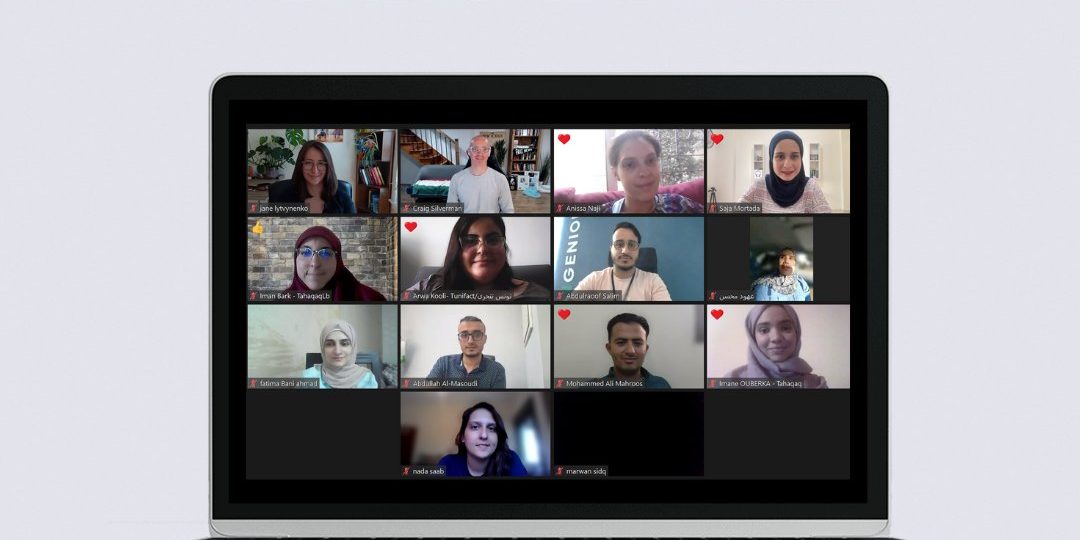 Silverman is an award-winning journalist and author and one of the world’s leading experts on online disinformation, fake news, and digital investigations. He works with ProPublica as a reporter investigating voting, platforms, disinformation, and online manipulation.

Lytvynenko is an internationally acclaimed reporter, researcher, and trainer. She’s currently a senior research fellow on the Tech and Social Change Project at Harvard Kennedy School‘s Shorenstein Centre where she’s developing and teaching a curriculum to newsrooms on investigating disinformation.

26 fact-checkers from 7 Arab countries attended the workshop. On the first day, the trainers focused on the media manipulation lifecycle, verifying images & video, and investigating social platforms. And on the second day they covered monitoring & searching, investigating websites, and best practices for workflow and archiving.

Iman Barq, the founder of the Lebanese platform “Tahaqaq”, pointed out the importance of the new tools that she learned during the workshop, while Arwa Kooli from the “TuniFact” initiative confirmed that she had learnt “many advanced and useful tools, in addition to a way of thinking that pushes us to move forward, even if some tools have limited benefits”.

Abdullah Al-Masoudi, from the Yemeni platform “Sidq“, said: “I learnt a lot about verifying websites and I understood the INVID tool better. In addition, I benefited from the part of verifying social media accounts, and the advanced research techniques in Twitter. We will use all these tools in our work.”

The Dalil project is part of AFCN led by ARIJ, with the support of the European Union and in cooperation with SIREN and JOSA. The project aims to increase the usage of locally driven, fact-checked online news in seven countries in the MENA region (Jordan, Lebanon, Iraq, Palestine, Morocco, Tunisia & Yemen).