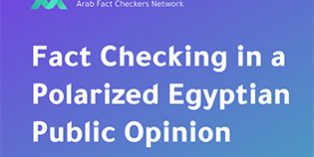 In the summer of 1967, Egyptians sat by their radios to listen to Ahmed Said, a broadcaster at “Sawt al-Arab” (voice of the Arabs), as he announced in his baritone voice that the “Egyptian army succeeded in defeating the Israeli army and is now teaching them a lesson they will not forget.” In another broadcast, Said read a statement issued by the Egyptian army about shooting down 81 of the enemy’s air force planes.

Arabs and Egyptians soon realized that what Said and his colleagues had announced on the radio were fake news and misleading information. The defeat (of course) exposed everything later. This incident is in fact engraved in Egyptians’ memories. And now 54 years on, reality is not that different as politicians, decision-makers, media personalities and public figures propagate lies on television channels, websites and newspapers in the absence of any oversight and lack of accountability.

A study conducted by a team from two universities, one in Germany and another in England, revealed that “during elections, the candidates who are more honest may have less chances of winning.” Mike Schneider, the lead researcher in the study, said “candidates who lie more, may have better chances to win in elections.”

One issue is the Grand Ethiopian Renaissance Dam which has preoccupied Egyptians particularly due to concerns of how it will impact the amount of water Egypt and Sudan get after its completion. Journalists loyal to President Abdel Fattah Al-Sisi are trying to deny the president’s responsibility for any  repercussions  resulting from the construction of the dam. For instance, Ahmad Moussa, who hosts a program on “Sada Al-Balad” television channel, said that “Ethiopia constructed 60% of the dam before Al-Sisi assumed the Egyptian presidency.” Meanwhile, Mohammed Nasser, who is loyal to the Muslim Brotherhood and hosts a program on “Mekameleen” television channel, claimed that Ethiopia “began building the dam after Al-Sisi became president and not before that.”

Saheeh Masr worked for two weeks to fact check these allegations by monitoring changes in the dam’s location, checking open-source information in Ethiopia and going through developments in Egypt from 2010 until 2021.

Saheeh Masr concluded that both allegations were false and misleading. Despite the fact that both Moussa and Nasser propagated misleading information, they were not held accountable or interrogated by their employers or by the governmental bodies tasked with regulating the work of media outlets.

Meanwhile, the National Media Authority, a governmental body that manages and monitors the press and the media in Egypt, suspended a news anchor who works in the state-run television station merely for putting on lipstick while unaware she was live on air. But this authority did not suspend or investigate media institutions that spread fake news and it did not hold any television hosts or presenters accountable for spreading misleading allegations.

During the COVID-19 pandemic, more fake news spread as television channels hosted many people who are not experts in the field of virology and infectious diseases, thus spreading false information regarding prevention and treatment. Saheeh Masr looked into more than 150 misleading statements and inaccurate news. For example, Fatima Naaout, an author, claimed that drinking hot water prevents from being infected with COVID-19, while a doctor said on TV that COVID-19 does not even exist and that the symptoms attributed to the virus are in fact a result of the 5G mobile networks.

Even the country’s health minister, Hala Zayed, did spread misleading information. Saheeh Masr documented 17 misleading statements that Zayed made since the start of the pandemic. The most recent statement was that according to the guidelines of international health institutions, pregnant women must not take the vaccine. Our team checked the open sources of health institutions, including the World Health Organization, and found that guidelines have been amended from June 2021 and have now supported the administering of the vaccine to pregnant women especially that they are classified among the most vulnerable in society if they were to catch the virus.

This spread of misleading information has not been limited to media outlets and government officials as even the president himself made misleading remarks.

In the past two years, Saheeh Masr documented 11 inaccurate and misleading statements made by Al-Sisi. For example, the president has said more than once that “the number of refugees in Egypt is five million.” However, there aren’t any official statistics that confirm this number. Meanwhile, the number of refugees documented by the UNHCR is much less than five million, but these numbers are inaccurate because not all refugees are registered at the UNHCR. Therefore, Saheeh Masr had to rely on the Ministry of Foreign Affairs’ official data to get accurate numbers and it learnt that Al-Sisi was mixing up between the term “refugee” and “foreigner” who simply resides in Egypt and whose life is not threatened in their home country.

For example, the Ministry of Antiquities published a statement on its Facebook page denying news that circulated on social media “allowing visitors of the Egyptian museum to take photos with the mask of Tutankhamun outside its glass box in exchange for a fee.” However, Saheeh Masr’s fact-checkers came across a document that was issued by the Ministry of Antiquities and posted on its website, advertising the possibility of taking a photo with the mask outside its glass box if a fee was paid.

The entire world has been trying to fight misleading information and fake news that has been spread on social media networks, and we certainly believe that we must fight fake news and those who promote them, whether they are politicians, decision makers, journalists or public figures, in the Arab world.

There is a huge amount of misleading information that is spread on a daily basis via television channels and media outlets. Hence, the role of fact-checkers in the Arab world has become more important but also critical since it is mainly about refuting lies of influential entities at a time when attaining accurate information is difficult.