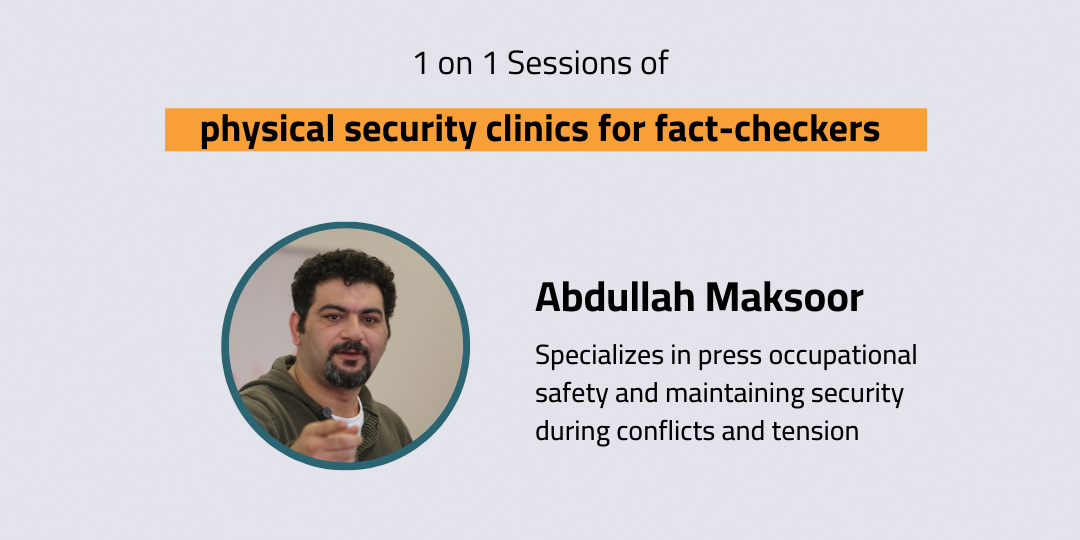 The clinics are part of AFCN’s project “Dalil”, supported by the European Union, and in partnership with “Siren” in Lebanon and “Josa” in Jordan.

The fact-checkers were trained by the trainer Abdallah Maksour, who specialises in physical security for journalists and in the media covering conflict areas, and the trainer of ARIJ’s safety and security course.

The trainees in the clinics emphasised its importance by learning how to assess and deal with risks, in addition to developing a plan of action to protect themselves physically.

Iman Barq, an independent fact-checker and the founder of “Tahaqqaq” initiative in Lebanon, says that the most important thing she learned from the clinic is “how to identify and assess the risks we face, whether on the ground or even in our place.”

For his part, Islam Aziz, a fact-checker from Palestine with the “Misbar” platform, stressed that the most important thing is “assessing and dealing with risks, anticipating events and taking the necessary precautions.”

The Dalil project is part of AFCN led by ARIJ, and aims to increase the usage of locally driven, fact-checked online news in seven countries in the MENA region (Jordan, Lebanon, Iraq, Palestine, Morocco, Tunisia & Yemen).